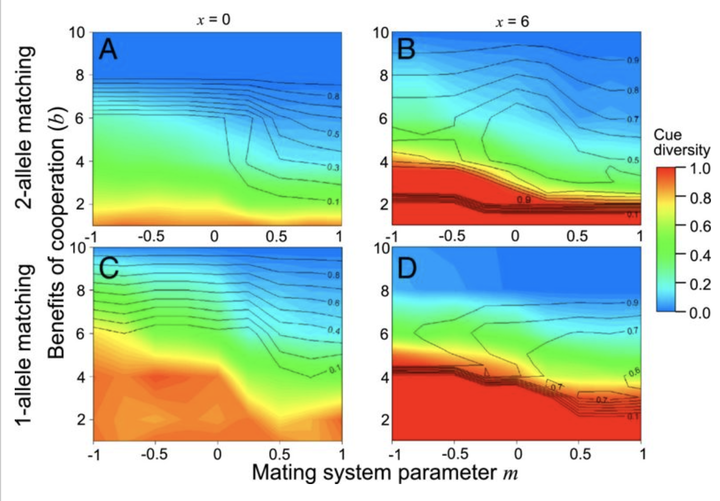 Organisms are predicted to behave more favourably towards relatives, and kin-biased cooperation has been found in all domains of life from bacteria to vertebrates. Cooperation based on genetic recognition cues is paradoxical because it disproportionately benefits individuals with common phenotypes, which should erode the required cue polymorphism. Theoretical models suggest that many recognition loci likely have some secondary function that is subject to diversifying selection, keeping them variable. Here, we use individual-based simulations to investigate the hypothesis that the dual use of recognition cues to facilitate social behaviour and disassortative mating (e.g. for inbreeding avoidance) can maintain cue diversity over evolutionary time. Our model shows that when organisms mate disassortatively with respect to their recognition cues, cooperation and recognition locus diversity can persist at high values, especially when outcrossed matings produce more surviving offspring. Mating system affects cue diversity via at least four distinct mechanisms, and its effects interact with other parameters such as population structure. Also, the attrition of cue diversity is less rapid when cooperation does not require an exact cue match. Using a literature review, we show that there is abundant empirical evidence that heritable recognition cues are simultaneously used in social and sexual behaviour. Our models show that mate choice is one possible resolution of the paradox of genetic kin recognition, and the literature review suggests that genetic recognition cues simultaneously inform assortative cooperation and disassortative mating in a large range of taxa. However, direct evidence is scant and there is substantial scope for future work.