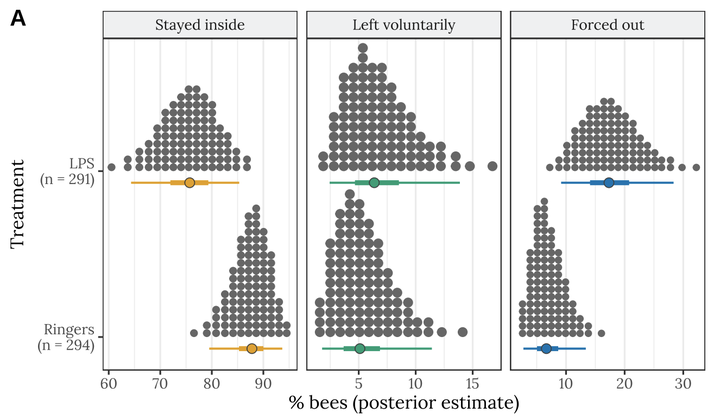 Animals living in large colonies are especially vulnerable to infectious pathogens and may therefore have evolved additional defences. Eusocial insects supplement their physiological immune systems with ‘social immunity’, a set of adaptations that impedes the entrance, establishment, and spread of pathogens in the colony. We here find that honey bee workers (Apis mellifera) that had been experimentally immune-challenged with bacterial lipopolysaccharide (LPS) often exited the hive and subsequently died; some individuals were dragged out by other workers, while others appeared to leave voluntarily. In a second experiment, we found that healthy workers treated with surface chemicals from LPS-treated bees were evicted from the hive more often than controls, indicating that immune-challenged bees produce chemical cues or signals that elicit their eviction. Thirdly, we observed pairs of bees under lab conditions, and found that pairs spent more time apart when one member of the pair had received LPS, relative to controls. Our findings suggest that immune-challenged bees altruistically banish themselves, and that workers evict sick individuals which they identify using olfactory cues, putatively because of (kin) selection to limit the spread of pathogens within colonies.