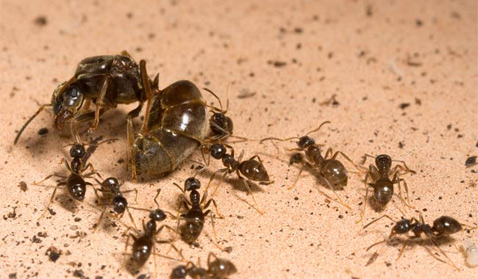 Social insects offer unique opportunities to test predictions regarding the evolution of cooperation, life histories and communication. Colony founding by groups of unrelated queens, some of which are later killed, may select for selfish reproductive strategies, honest signalling and punishment. Here, we use a brood transfer experiment to test whether cofounding queens of the ant Lasius niger ‘selfishly’ adjust their productivity when sharing the nest with future competitors. We simultaneously analysed queen cuticular hydrocarbon (CHC) profiles to investigate whether queens honestly signal their reproductive output or produce dishonest, manipulative signals, providing a novel test of the evolutionary significance of queen pheromones. Queens produced fewer workers when their colony contained ample brood, but only in the presence of competitors, suggesting selfish conservation of resources. Several CHCs correlated with reproductive maturation, and to a lesser extent with productivity; the same hydrocarbons were more abundant on queens that were not killed, suggesting that workers select productive queens using these chemical cues. Our results highlight the role of honest signalling in the evolution of cooperation: whenever cheaters can be reliably identified, they may incur sanctions that reduce the incentive to be selfish.