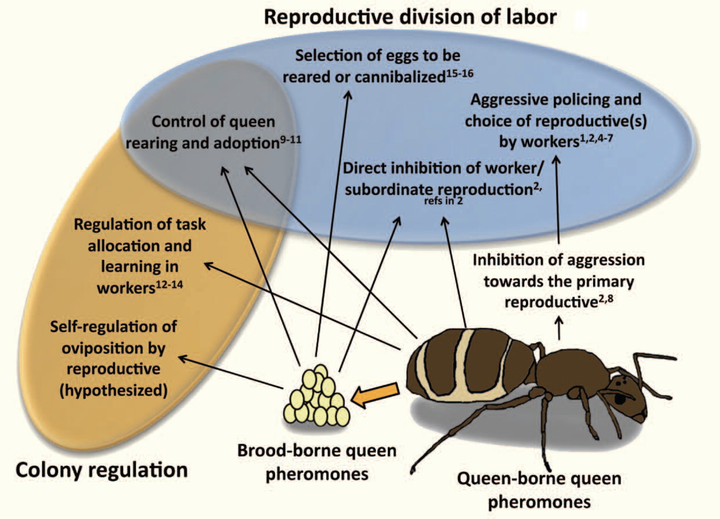 Group-living species produce signals that alter the behavior and even the physiology of their social partners. Social insects possess especially sophisticated chemical communication systems that govern every aspect of colony life, including the defining feature of eusociality: reproductive division of labor. Current evidence hints at the central importance of queen pheromones, but progress has been hindered by the fact that such pheromones have only been isolated in honeybees. In a pair of papers on the ant Lasius niger, we identified and investigated a queen pheromone regulating worker sterility. The cuticular hydrocarbon 3-methylhentriacontane (3-MeC31) is correlated with queen maturity and fecundity, and workers are also more likely to execute surplus queens that have low amounts of this chemical. Experiments with synthetic 3-MeC31 found that it inhibits ovarian development in queenless workers and lowers worker aggression towards objects coated with it. Production of 3-MeC31 by queens was depressed by an experimental immune challenge, and the same chemical was abundant on queen-laid eggs, suggesting that the workers’ responses to the queen are conditional on her health and fecundity. Together with other studies, these results indicate that queen pheromones are honest signals of quality that simultaneously regulate multiple social behaviors.